Last year, at the 10 year anniversary celebration of the German science fiction magazine Nova, that I co-edit with Olaf G. Hilscher, I decided to continue my editorial work at Nova – and its international offspring. the e-zine InterNova – for a few more years, at least until issue # 30 and 15 years of participation. This is not to say that I will quit editorial work altogether. I have already a new project in mind that will require some time and effort to be started and established. InterNova – currently awaiting its relaunch into its third incarnation as a regularly published online magazine, in collaboration with my new co-editor Fran Ontanaya and our assistants Nils Müller and Sven Klöpping – brought me into contact with writers, editors and translators from more than twenty countries and made me aware, far beyond the genre boundaries of science fiction, of the incredible richness of the literatures – and the arts in general – of countries and continents outside of the German and English speaking world. I made a lot of personal discoveries especially in the modern literatures of India, Southeast Asia, Japan, the Carribean area and Africa. I found, however, that it can be difficult to find extensive information about artistic traditions that are not on the map of commercial publishers and requires research in obscure academic magazines and special secondary literature that are not always easily available. As a skeptic of the traditionally eurocentric view of literature and arts, I pondered over the idea of creating a central information source for world culture on the Internet: an Internet World Culture Repository.

I’ve written two documents that lay ground for the project (both can be downloaded as pdf files via the download widget on the right). The manifesto “Unity in Diversity and the Idea of World Culture” is a programmatic statements that explains the motivations behind the project. The BTI draft version 0.5 is a technical concept for the planed website with general remarks and commented mockups that, I hope, will be useful for web developers interested to contribute work to the repository. Both documents are preliminary and any comments and suggestions for improvements are welcome, before finished versions of the documents can be widely spread on the Internet to find contributors and collaborators.

If you’re in any way interested in my idea and maybe even willing to join in and make it real, please send me an e-mail to mki@iacd.de

This year’s event calendar in the 3D Internet world of Second Life begins for me next weekend with two events surrounding the art installation Tales of the Future by Asmita Duranjaya. Asmita, an experienced and inventive virtual artist, has accepted an invitation to create a new installation on a sim offered free-of-charge for four weeks. She has selected several of my Ambient Etudes music pieces (that can be downloaded here via the download widget on the right) and created five audiovisual spaces that reflect or process my music in original ways. A marvelous work, as the first visitors –  and myself – can confirm.

As Asmita’s sidekick on the opening weekend of the exhibition I will read Mike Mitchell’s excellent English translation of my story “Planck-Zeit” (translated for the anthology The Black Mirror, edited by Franz Rottensteiner) on Saturday, January 18th, 2:00 pm SLT / 22:00 GMT / 23:00 CET. This will be followed on Sunday, January 19th, 1:00 pm SLT / 21:00 GMT / 22:00 CET by electronic live music streamed from my home studio, as always ambient sounds combined with sequencer-driven sections in style of the Berlin school electronic music, this time supported with a colorful particle show by Asmita. 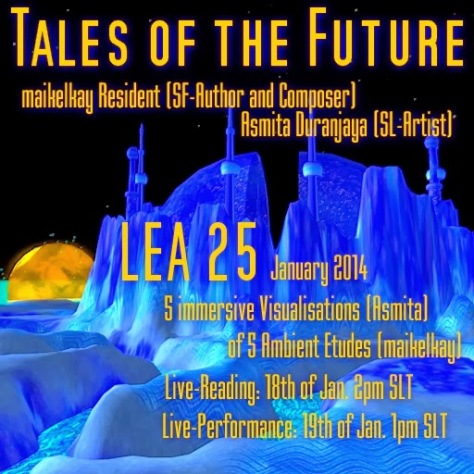