On Friday, July 26th, at 1:00 pm SLT / 22:00 CET I will read one of my English stories in Second Life. The location is The Brigadoon on Rihiveli Isle. The SLURL is

Thanks to Cyhtleen Earhart and Roxy Roller for the invitation.

For a long time it has been my dream to establish a common writer’s office with several collagues to share ressources, motivate and discipline each other and generally break with the usually solitary job of writing fiction. It’s a secret of the trade that being your own boss can sometimes be stifling when faced with the freedom to do what you want. The direct exchange with others is what many creatives miss in their daily routine. When I recently chatted with my colleague Christian Kathan about this we came to the idea – as we live too far apart and there’s no way to share a workplace in reallife – why not create a writer’s office in the virtual word? Within a few days the idea was realized. Thorsten Küper aka Kueperpunk Korhonen sublet a parcel of land in Second Life and set up a house for us, I organized the furnishing, Sven Klöpping joined in as the team’s third writer and since then we meet once or twice a week to share news about our work, confer with each other and plan collaborations. Our office is now part of the growing Kreativdorf (creative village), a gathering of culturally active German SL members around Thorsten’s renowned event location Kafé Kruemelkram.

On Thusday July 4th we hosted in our office and some of the surrounding locations a virtual addendum to the ten year anniversary celeberation of the German sf magazine Nova that I edit with Olaf G. Hilscher, with readings by Sven Kloepping and Michael Marrak and a short musical interlude by myself, despite some technical problems a well-received event. Below some views of our writer’s office, first the main room, then the seating corner where we usually meet and talk and finally the conference room with a huge inworld webbrowser that we use to note and announce information. 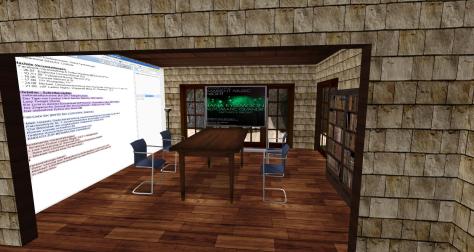 My novella “Zur Feier meines Todes”, published in my first story collection Die letzten Tage der Ewigkeit (Wurdack Verlag), has been nominated for the Deutsche Science Fiction Preis (German Science Fiction Award), bestowed by the largest German sf club SFCD, in the category of best German science fiction story of 2012. Between 2002 and 2006 I have already won this award three times for my novellas but especially with three nominations of Matthias Falke, Karsten Kruschel and Michael Marrak for stories published in Nova, the German sf magazine that I edit with Olaf G. Hilscher, it will be a tough race this year.

Technical problems – unstable or insufficient connections, instabilities of the viewer software – are still far too common concomitants of cultural events in the virtual world. What happened during my reading in the Metropolis Grid last Saturday, however, was rather unusual and may have been due to the fact that the administrators of small Open Simulator-based alternatives to Second Life have to get along with far more modest resources than the scene’s giant. Just as Thorsten Küper aka Kueperpunk Korhonen was about to introduce me the whole region crashed and the respective server had to be restarted. My – fortunately very patient – listeners had to relog into the grid’s starting point and return one by one to the event location Rostige Druckerpresse, the grid home of the writer group Brennende Buchstaben. After that, however, it was a successful and, with about twenty avatars present, well-received event. I read my short story “Der Sturz” from the cyberpunk anthology Fieberglasträume (Begedia Verlag), edited by André Skora and Frank Hebben. It was especially appreciated that this story of an artificial intelligence that tries to reconstruct his realword avatar and in doing so his memories is clearly inspired by my activities in Second Life. 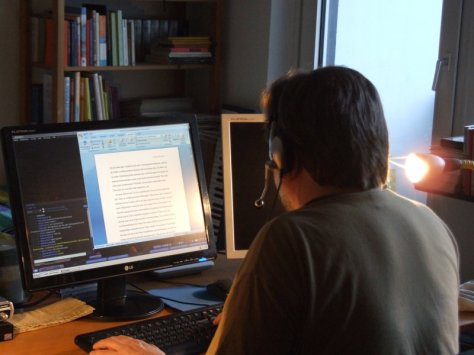 It should be noted that when I started the story I didn’t know that it would turn out into something like that. The initial image of a broken android whose parts are scattered about a stair was actually inspired by the fact that I live in Wuppertal, the city of hills and stairs. The story’s setting has a real counterpart, a notoriously long and steep stair between Ottenbrucher Straße and Grünewalder Berg in Wuppertal-Elberfeld (that some of my fellow writers may remember from the German cyberpunk summit in April 2012). The great thing about writing is that even the most mundane things can inspire a story and it was here, taking a rest when trying to make a shortcut via this stair, that the initial idea for “Der Sturz” hit me.

Here some more impressions of the evening, as seen from my office.

With regard to magnitude, scope and popularity, Second Life is still unique among the general-purpose virtual worlds in the Internet. It is, however, not the only virtual world of its kind. Based on Open Simulator, an open source implementation of the Second Life server software, a number of other metaverses (grids) have been created, some of them on a professional level and eager to surpass Second Life in terms of speed, stability and cost efficiency. Although there’s as yet no real alternative to Second Life for writers, musicians and artists who want to attract audiences with cultural events in virtual worlds, I try to keep an open mind to the activities in other grids and thus followed Thorsten Küper’s aka Kueperpunk Korhonen’s invitation to my first virtual event outside of Second Life.

On Saturday, July 13., 20:00 local time (CET) I will read a new Cyberpunk story in the Rostige Druckerpresse, a location especially created for events of the writer group Brennende Buchstaben, in Metropolis-Grid. The grid can best be accessed with the free Imprudence viewer and setting-up an account, of course, is free of charge. The SLURL is secondlife://hypergrid.org:8002:Brennende%20Buchstaben/135/46/41/ I’m curious what new experiences are waiting for me and I’m looking forward to meet some of you there.

The winners of this year’s Kurd Laßwitz Preis, the most important German science fiction award, bestowed by the science fiction professionals in Germany, Austria and Swiss, have recently been announced. My novella “Zur Feier meines Todes”, included in my collection Die letzten Tage der Ewigkeit, published by Wurdack Verlag, has been ranked third in the category of best German science fiction story of the year, slightly behind Michael Marrak’s novella “Der Kanon mechanischer Seelen” in Nova 20. Congratulation to winner Klaus N. Frick –  probably better known as Perry Rhodan editor than as writer – for his story “Im Käfig” in Exodus 29.

Nova 21, the latest issue of the German science fiction magazine Nova that I edit with Olaf G. Hilscher, has recently been published. Apart from new short stories by Uwe Post, Marcus Hammerschmitt, Steffen König and Norbert Stöbe, a novella by Michael Marrak, a classic reprint by German science fiction, film and television legend Rainer Erler and a guest story by Aleksandar Ziljak (Croatia) it includes my own story “Arkadia in transit”. Nova continues to be distributed to selected German, Austrian and Swiss station and airport bookshops. In the hope of attracting further new readers the magazine is now available, with slighty reduced number count, for a significantly reduced price.

My novelette “The Spirits”, my second fiction work originally written in English, has just been published, in a Romanian translation by Antuza Genescu, in Revista SRSFF, the online magazine of the Romanian Science Fiction and Fantasy Association. Thanks to the translator and to Cristian Tamas for providing contacts to the Romanian sf scene. Thanks to Tom Baxter for proofreading the English text.